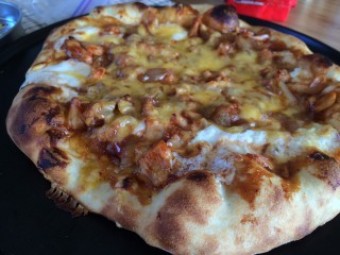 Combine all dry ingredients into mixing bowl, combine wet ingredients and add to dry. Mix with dough hook (kitchenaid is stir) until combine and pulling away from sides of mixer. Increase speed of mixer (on the kitchenaid it is 4) and mix for 4-5 minutes.
Spray a bowl with non-stick spray, place dough in bowl, cover and refrigerate for 18-24 hours (or rise in warm space until doubled, but it will be much better if you let it proof longer).
Remove dough to counter and punch down into a rough rectangle shape then tightly roll into a log 12-15 inches in length. Split the dough into 3 equal parts using the scraper or either a large serrated knife or a dough scraper. Flatten each into a disk, then shape it into a smooth ball by folding the edges of the round in toward the center several times and rolling it between your hands on the counter. You may want to moisten the counter with water to up the surface tension a bit so that the ball tightens up instead of sliding across the counter.
Cover each ball with a clean tea towel and allow to rest for 30 minutes. (At this point you can also transfer doughs to air-tight plastic containers and refrigerate for up to 8 hours. Just make sure you bring them to room temp for half an hour before forming.)
To bake, heat oven (pizza stone inside on lower rack) to 500 degrees F, or hotter if possible. Give the oven a good half hour to heat up.
When you're ready to build the pizzas, sprinkle a couple teaspoons of flour on a peel and place the dough right in the middle. Pound the dough into a disk with your hands, then pick it up and pull it through your fingers to create the outer lip, a critical feature that cannot be created with a rolling pin. (In fact, rolling rather than stretching will just ruin the whole gosh-darned thing.)
At this point you need to start stretching the dough. The most-efficient way to do this is to spin the dough so that the weight of the outer lip stretches the dough via centrifugal force. You can also stretch the dough on the board by turning and pulling it, and turning and pulling. Shake the peel from time to time to make sure the dough doesn't stick. Sticking would be bad.
Brush the lip with oil, then dress the pizza with olive oil and tomato sauce. Even distribution is tricky, so you may want to ladle an ounce or two into the middle and then spread it out with the back of the ladle. Top with fresh herbs (oregano and basil) and a good melting cheese. I usually go with a mixture of mozzarella, Monterery Jack and provolone, but that's me.
Slide the pizza onto the hot pizza stone. To do this, position the front edge of the peel about 1-inch from the back of the stone. Lift the handle and jiggle gently until the pizza slides forward. As soon as the dough touches the stone, start pulling the peel back toward you while still jiggling. While a couple of inches of dough are on the stone, quickly snap the peel straight back. As long as the dough isn't stuck on the peel, it will park itself nicely on the stone.
Keep an eye on the dough for the first 3 to 4 minutes. If any big bubbles start ballooning up, reach in with a paring knife or fork and pop them. Bake for 7 minutes or until the top is bubbly. Then slide the peel under and lift to check the underside, which should be nicely brown.

adapted from Alton Brown
Pictured is a bbq chicken pizza.
Other recipes by Peri Moritz
Added on: March 23, 2015
Viewed: 781 Times

adapted from Alton Brown
Pictured is a bbq chicken pizza.